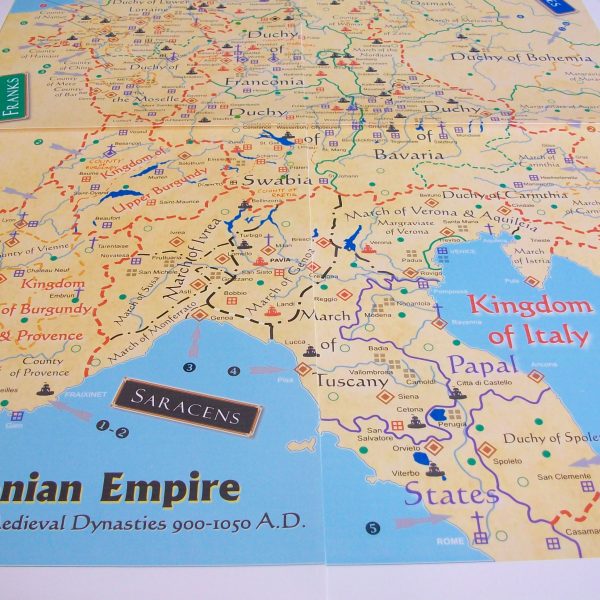 Ottonian Empire game is used to play the dynastic game which brought into being the Holy Roman Empire.

The price of the game does not include shipping or handling. The game is a card based board game for 2 – 5 players, ages 13+, set in the 10th century AD.

Players re-live the dynastic struggles which brought into being the Holy Roman Empire from the dying embers of the Carolingian Empire. The game includes a map, 250+ cards, 4 dice, 200+ counters, play money & rule book.

The games includes 2 Decks of Cards: the Imperium Deck and the Title Deck.  The Imperium Deck contains the most famous nobility of the Ottonian Age (900-1050 A. D.), with their personal characteristics, and a collection of strategic cards, which the players use to build up their Dynastic Faction, acquire offices and titles and vie to become Holy Roman Emperor.  The Title Deck includes the most notable titles of Nobility and Ecclesiastical Offices of that age and a description of the possessions of their domains.

The map features the political divisions of 1oth Century, Central Europe, with the Kingdoms, Duchies, Margraviates and Counties that existed in the Ottonian epoch.

Play proceeds by each player drawing and playing cards, engaging in political and military conflicts to extend and protect their domains and defend the empire from foreign invasions.

The exceptional educational value of the game consists in its exacting detail and accuracy in regard to historical facts, names, places, dates and political and social relationships of the 10th century.

The Rule book includes a complete description of all the game components, easy to read rules, and a a variety of game scenario options, from games which last 1 hour to the Grand Campaign game which lasts 6 hours, so that all ages will find in the game, Ottonian Empire, a lively and ever-changing entertainment experience.

Playing time varies from 1 to 6 hours, depending on scenario chosen.

We use cookies on our website to give you the most relevant experience by remembering your preferences and repeat visits. By clicking “Accept”, you consent to the use of ALL the cookies.
Cookie settingsACCEPT
Manage consent

This website uses cookies to improve your experience while you navigate through the website. Out of these, the cookies that are categorized as necessary are stored on your browser as they are essential for the working of basic functionalities of the website. We also use third-party cookies that help us analyze and understand how you use this website. These cookies will be stored in your browser only with your consent. You also have the option to opt-out of these cookies. But opting out of some of these cookies may affect your browsing experience. For information about our other Customers and Privacy policies, please visit our Customer @ Privacy Page.
Necessary Always Enabled

Any cookies that may not be particularly necessary for the website to function and is used specifically to collect user personal data via analytics, ads, other embedded contents are termed as non-necessary cookies. It is mandatory to procure user consent prior to running these cookies on your website.